How Great thou Government Art?

The supposition is that a society and the government that created that society are good in proportion to how they financially reward ability and effort. Societies where wealth is proportional to ability would be better than those who reward people randomly or socialistically.

The Ability vs. Income and the Ability vs. Logarithmic income are the same except one has a logarithmic scale to better show the lower and more common incomes.  This scale shows I = C*A^6 or Income equals Ability raised to the 6th power times a constant.  This is somewhat how income is distributed in our society except that ability isn’t always important.  The high pay scale of some with ability camouflages the fact that some wealthy people have little ability.

There is nothing good to say about the distribution of wealth in this or any known earth society. 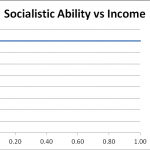 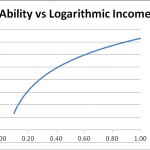 This entry was posted in Definitions. Bookmark the permalink.